Why would a whale sing without friends to hear its song? Lynne Kelly says we all shout out into the darkness on a bid to make those vital human relationships

When most writers sit down to write a new story, they start with a character or plot. Mine started with a whale who wouldn’t let me go.

In 2015 I learned about the 52 hertz whale, also known as ‘The Lonely Whale’ and ‘52 Blue’. He sings at a frequency unlike other whales – 52 hertz instead of 10-20 hertz. He’s been out there for decades. How was it possible I hadn’t heard of him? I wondered what life was like for this whale who sang like no other.

We’re able to hear the song of 52 Blue, and all whales, because of an ocean-wide system of hydrophones, originally used by the US military to detect Soviet submarines. With the thawing of the Cold War in the 1980s, the military made the technology available to marine biologists. William Watkins of Woods Hole Oceanographic Institution (WHOI) noticed one whale song in the North Pacific ocean that didn’t sound like any other. The song had characteristics of both blue and fin whales, but the frequency was much higher. For humans, 52 hertz is a low sound – like the lowest note of a tuba – but it’s high for whales. The song would continue sometimes for hours before stopping as abruptly as it had started. For the next 12 years, Watkins and his team recorded the song from fall to late winter, when the whale swam out of range of the hydrophones.

No one is certain why the whale sings at this unusual frequency. Some biologists hypothesise that he is either malformed in some way or is a hybrid of two species of whale.

Though the WHOI researchers found that the 52-hertz song was coming from only one source, more recent recordings suggest that perhaps there’s a small population of whales that sing at this high frequency.

The song isn’t the only strange thing about this animal. Most whales visit the same areas each year, migrating to tropical waters in the winter and colder waters in the summer.

But, throw a handful of spaghetti at a map of the US Pacific coast, and you’ll have an approximation of 52 Blue’s migration. His path varies from one year to the next, and he doesn’t spend much time in one place. Sometimes he backtracks along the same coasts he’s just covered. Another season, he’ll swim a jagged path or head straight out into deeper waters. Looking at the tangled lines of his map, I can’t help asking, “What are you looking for?”

I’m never one to give up on sleep, but I woke up in the middle of the night still thinking about this whale. So, I got up to write. I’d been drafting another manuscript, but couldn’t figure out the plot. Maybe a story about this whale would work out. Or maybe not, but I had to write it. I suspected other people would be as fascinated by 52 Blue like I was.

I needed a character. A character who’d be not just fascinated, but compelled to reach out to the whale.

In my work as a sign language interpreter, I’ve known so many kids who were one of only a few deaf students in school. Some schools have only one deaf student, like my character Iris. She feels an immediate connection to this whale when she learns about him in science class, and is determined to find a way to tell him someone hears his song.

Though most deafness isn’t hereditary, I gave Iris a set of deaf grandparents. Without the joy and fulfillment she gets from her interactions with her grandmother, readers might get the impression that Iris hates being deaf. It was important for me to avoid that. Yes, she struggles to be understood, but she doesn’t wish to change who she is. The strong bond and rich language Iris and her grandmother share also hints at the kind of friendships Iris could have if only she went to a school with other deaf students. 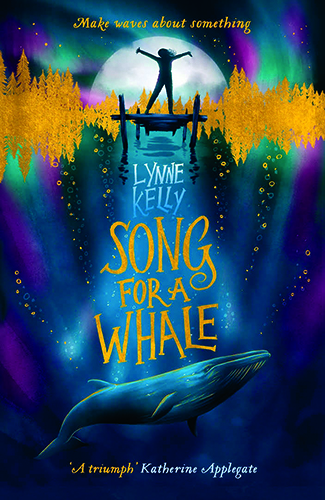 About a year after learning about the 52 hertz whale (a quick writing pace for me), I had a presentable manuscript of Song For a Whale. The whale in the story, one I call Blue 55, is made up of the few characteristics we know about 52 Blue, plus my own imagination and what I learned from researching whales.

Of course we’ll never know if this whale is truly lonely, or why he keeps singing his unusual song that nothing in the ocean responds to. Likely it’s instinctual for a whale to sing. Maybe he enjoys singing. I hope so.

I could compare that song to any creative endeavour: we start a project not knowing if anyone will watch or listen to it. We love the creative process, or at least seeing the results of making something out of nothing. There’s no guarantee we’ll have an audience, but we write the story. We paint the picture or choreograph the dance. We sing the song.

Song For a Whale by Lynne Kelly is out now (Piccadilly Press, £6.99)