The English capital has the highest commercial rents in Europe and has seen empty office space increase by almost 20 per cent since 2020.

The rise of home working and sky-high commercial rents have left London with 20 million square feet of empty office space – a 20 per cent rise since 2020.

It’s the equivalent of almost 17 Houses of Parliaments, and campaigners are now calling for landlords to let community groups or small and medium enterprises (SMEs) use the empty units at knockdown prices.

Disused office space in the English capital is up from 16.9 million square feet in 2020 to 20.2 million square feet at the end of 2021 – and with London having the highest commercial rents in Europe, businesses are not flooding back after the pandemic.

The Utilize Project, a social enterprise working to fill empty commercial units and invigorate communities, is now calling on landlords to offer up their units as “meanwhile spaces” – units offered to start-ups, community groups or SMEs on cheaper, temporary contracts.

Founder and director Mahmud Shahnawaz said: “Empty commercial property brings with it a realm of issues for the community, from increased crime rates to poor local economies.

“They also give opportunity to SMEs, who can’t compete with current commercial rental prices, to have their start.”

The government has been pushing people to get back to their offices in recent months. But a recent study by the Office for National Statistics found 84 per cent of workers wanted to continue splitting their time between home and the office. What’s more, hybrid working patterns have shifted towards employees spending more working hours at home.

The report also found more than a third of working adults in Great Britain worked from home at least partly this spring, the Office for National Statistics (ONS) has found.

Some landlords are already giving up their office space to convert it into housing under permitted development rights.

The policy allows landlords to bypass planning regulations – and therefore affordable housing policies – and is responsible for the loss of almost 20,000 affordable homes in recent years, according to the Local Government Association. 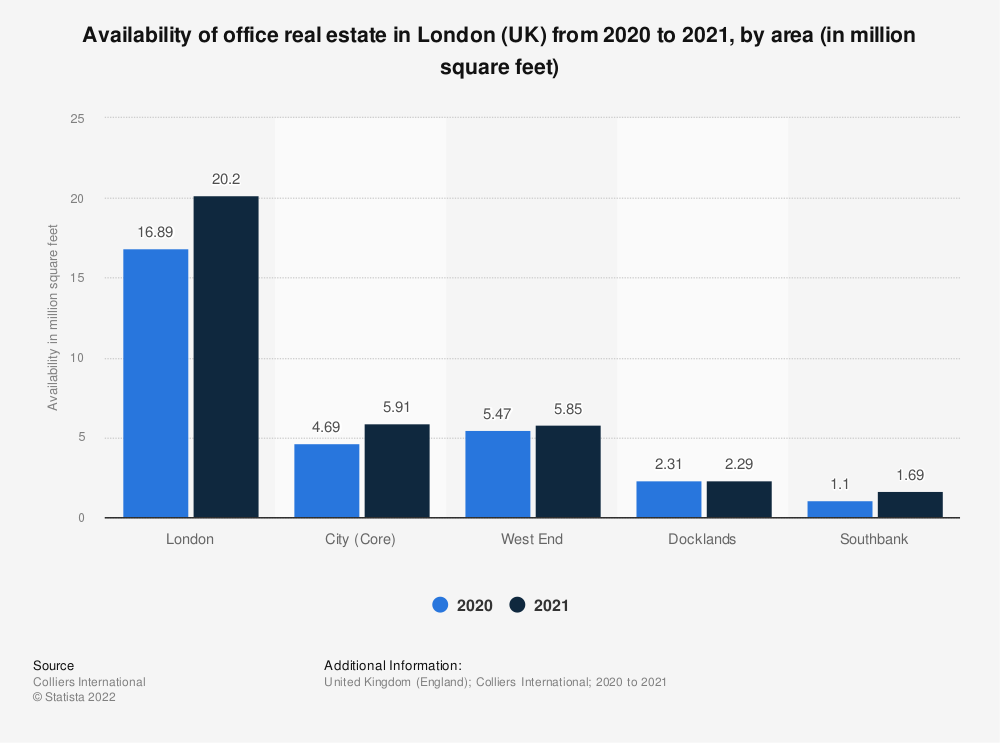 In total, 73,575 new homes – often luxury flats – have been created by converting office blocks since the rules were introduced in England and Wales in 2015.

The area of London with the largest amount of available office space is the City – Europe’s financial centre. The Square Mile is home to an estimated 27,365 businesses but has 5.91 million square feet of available space – the equivalent of 98 St Paul’s Cathedrals.

The West End is not far behind, with 5.85 million square feet of available office space, equivalent to 75 Buckingham Palaces. The area is home to the priciest rents in London, with office space going for £117.50 per square metre.

In the Docklands, there is space equivalent to 91 Westminster Abbey’s and on the Southbank available office space equals 84 Royal Albert Halls.

What’s more, more than 22,500 commercial units have been empty for at least six months, according to Centre for London. And the charity’s research manager Josh Cottell told The Big Issue half of those had been empty for two years.

He said: “As shown by the rise in empty office space following the pandemic, we could see more space going unused as working patterns change.

“Leaving sites empty comes at a cost for building owners, and it’s a shame to see so much space being unused when it could support the next generation of entrepreneurs, artists and activists to emerge and experiment. Opening up vacant spaces to meanwhile uses also adds some buzz to a building or a street.

“Government could reduce business rates for meanwhile uses to encourage building owners not to leave their property empty. The mayor of London could also set up a meanwhile use competition for empty sites across London, to stimulate ideas on how long term empty sites could be repurposed.”

The government’s Levelling Up and Regeneration Bill introduced in May includes plans that would force landlords in England to let empty shops out.

Under the move, buildings left vacant for a year would have to be entered into a “rental auction”.

The British Retail Consortium (BRC) has calculated that one in seven shops in Britain is empty.