Coldwar Steve features alongside the greats at National Gallery exhibition

Celebrated Brexit chronicler Coldwar Steve was already having a big year after creating a hugely popular Big Issue cover at the end of March.

Now he’s scored another win, with one of his pieces set to appear atone of the UK’s most prestigious galleries.

Success followed the satirist after designing the piece to link in with the first Brexit deadline, with little-known publication Time also asking him to create a cover for their magazine. Where The Big Issue leads, others follow.

Now the artist, real name Chris Spencer, has created alarge-scale collage titled Harold, the Ghost of Lost Futures to coincide with the Scottish National Gallery of Modern Art (SNGMA) in Edinburgh’s Cut and Paste | 400 Years of Collage exhibition. But unlike his previous work, which uses figures like Boris Johnson, Cilla Black, and Steve McFadden to poke fun at Britain’s political class, this piece strikes an optimistic tone.

Speaking about the piece, the artist said: “It is a huge honour to have my work displayed at one of my favourite galleries, in one of my favourite cities. To be exhibited alongside such luminaries as Peter Blake, Jamie Reid and Louise Nevelson is frankly mind blowing.

“For this composition, I wanted to move away from my usual Brexit dystopian hellscapes, to produce something visually and spiritually uplifting.

“I was inspired by Martin Creed’s neon ‘Everything Is Going to Be Alright’ installation, which is blazoned across the gallery’s frieze.

“Martin Creed almost certainly wasn’t implying that everything is actually going to be alright, but I thought that even in the depths of despair, it is somewhat comforting to remember that a large part of Britain is still wonderfully diverse, compassionate and inspirational. This enormous collage is a celebration of Britain’s diverse and creative magnificence.”

Harold, the Ghost of Lost Futures will be displayed outside the front of the SNGMA (Modern Two) until Sunday October 27. 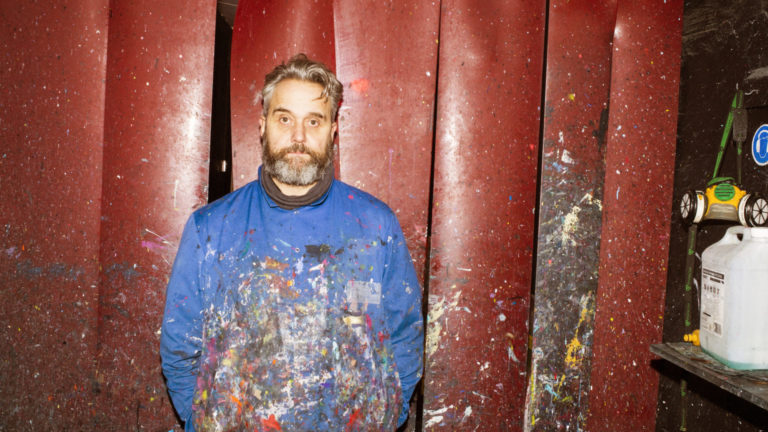